Frank Bisignano joined First Data as Chief Executive Officer in 2013 and added the title of Chairman of the Board in 2014.

Under Bisignano, First Data enables electronic payments around the world, 2,800 times a second, for more than 6 million merchant locations, over 4,000 card issuers, and millions of consumers. As the payments industry leader, First Data gives its clients the tools they need to thrive in today’s fast-changing world.

Upon his arrival at First Data, Bisignano began to rapidly transform the 46-year-old company from its position as the world’s largest traditional payment processor into a technology innovator, industry collaborator, and commerce enabler for the 21st Century.

In his early days, he steered the rollout of Clover Station, a breakthrough point-of-sale platform designed for small and midsized businesses to track inventory, manage employees, build lasting customer relationships, and accept the full array of payments, from cash to Apple Pay.

The spirit of a technology company soon took hold as Bisignano partnered with, or acquired, leading startups to further strengthen First Data’s portfolio of cutting-edge solutions and services.

In June 2014, First Data announced an historic $3.5 billion private placement of equity which began a deleveraging effort that continues today.

The private placement was followed by a $2.6 billion IPO in October 2015, the largest U.S. IPO of the year.

These transactions, along with substantial refinancing of First Data’s debt, ratified the transformation begun under Bisignano’s leadership and set the course for First Data’s future. In May 2017, that new course forged ahead with the acquisition of CardConnect for $750 million, the company’s largest such deal in thirteen years.

Prior to joining First Data, Bisignano was the co-chief operating officer for J.P. 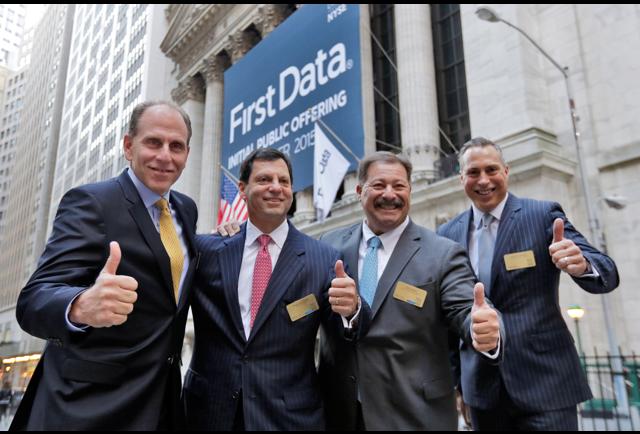 Morgan Chase’s businesses in over 60 countries. Under Bisignano’s leadership, the Mortgage Banking unit reported 2012 net income of $3.3 billion, a turnaround that reversed a net loss of $2.1 billion in the prior year.

Earlier in his career, Bisignano held several roles at Citigroup that included serving on the bank’s management committee and roles as chief administrative officer for the Corporate and Investment Bank and CEO of Citigroup's Global Transactions Services business.

While CAO, Bisignano also served as the firm-wide deputy head of technology and operations, a post he held during 9/11, when he deployed and ran Citigroup's business continuity plan. The plan required emergency relocation of 16,000 employees displaced by the loss of 7 World Trade Center, which was crippled by the terrorist attack.

1. Hes a native of Brooklyn

In later years at Citi, as CEO of the bank’s Global Transactions Services business from 2002–2005, Bisignano’s unit’s revenue grew to $6 billion from $4 billion annually, with bottom line performance swinging from a net income loss of $400 million to a profit in excess of $1 billion during his tenure.

During his tenure at Citi, which began in 1994, Bisignano played a key role in a series of historic transactions as he took on more senior roles.  These deals included the merger of Citicorp and Travelers and the acquisitions of Salomon-Smith Barney and Primerica Financial Services, among others.

Before Citi, Bisignano worked at First Fidelity Bank from 1990 to 1994, where he was an executive vice president overseeing technology and operations, and later served as chief consumer lending officer.

At First Fidelity, Bisignano earned a reputation for skillfully managing complex mergers and integrations, overseeing 13 acquisitions into the business and consolidating eight banks into one.

Throughout his career, Bisignano has worked to create career opportunities for men and women who served in uniform.

Will all cryptocurrencies rise

Bisignano’s commitment to veterans has continued at First Data, where the First Data Salutes program provides broad opportunities and support for returning military and their families.

A strong supporter of diversity, Bisignano also helped create seven new employee resource groups at First Data, earning the company a roster of accolades for its efforts, ranging from veterans’ groups to the lesbian, gay, bisexual and transgender (LGBT) community.

Bisignano is a member of the Board of Directors of Humana Inc.

Among his non-profit commitments, he serves on the boards of the Partnership for New York City, the National September 11 Memorial and Museum, the Mount Sinai Health System, the advisory board for the Institute for Veterans and Military Families (IVMF), and is a trustee of the Battery Conservancy and St.

Patrick’s Cathedral. He also serves on the boards of the Metro Atlanta Chamber and The Commerce Club of Atlanta.

In 2010, Bisignano was awarded Syracuse University’s Chancellor's Medal for Outstanding Achievement for his innovation in technology & education.

In 2014, Bisignano received the Colonel Michael Endres Leadership Award for Individual Excellence in Veteran Employment from the U.S. Chamber of Commerce.

The New York Institute of Technology honored Bisignano in May 2014 with a Doctor of Commercial Science degree for his achievements in business and his philanthropic endeavors.

In May 2017, Syracuse bestowed Bisignano with an Honorary Doctorate of Law degree for his distinguished business career and his work in championing higher education and supporting the disadvantaged.

Bisignano was born and raised in Brooklyn, New York. He has three children, Morgan, Alexa, and Henry. He and his wife, Tracy, reside in New Jersey.