The input–process–output (IPO) model of teams provides a framework for conceptualizing teams that suggests that many factors influence a team's productivity and cohesiveness. It "provides a way to understand how teams perform, and how to maximize their performance".[1]

The IPO model of teams is a systems theory, as it rests on the assumption that a team is more than one-to-one relationships between variables, and more than the sum of its members.

Inputs include any antecedent factors such as organizational context, task characteristics, and team composition[1] that may influence the team itself, directly or indirectly.[2]

Processes are operations and activities that mediate the relationship between the input factors and the team's outcomes.[2]

Processes include group norms, as well as a group’s decision making process, level of communication, coordination, and cohesion.[1]

Specifically, processes can be things such as:

Some examplesof process device is processor and storage device are RAM , Hard Drive and DVD/CD Drive.

Outputs are the consequences of the team's actions or activities.

Most often this refers to the team's tangible output – what they made, achieved, or accomplished.[2] Whether the team wins or loses, whether their product is of adequate quality, and whether they were successful in completing their goals efficiently are all questions of tangible outcome.

Other outcomes are also important, such as changes in the team's cohesiveness, the degree to which the team learns to be prepared for future tasks, the uniqueness of the team’s solution, and whether it increases in efficiency through practice.

Although the IPO model of teams has proven to be useful, it is important to consider the limitations of this model as well.

They are not events that happen, but merely mediators of the input-output relationship.

The outputs of a team’s actions can provide the input for their next action. 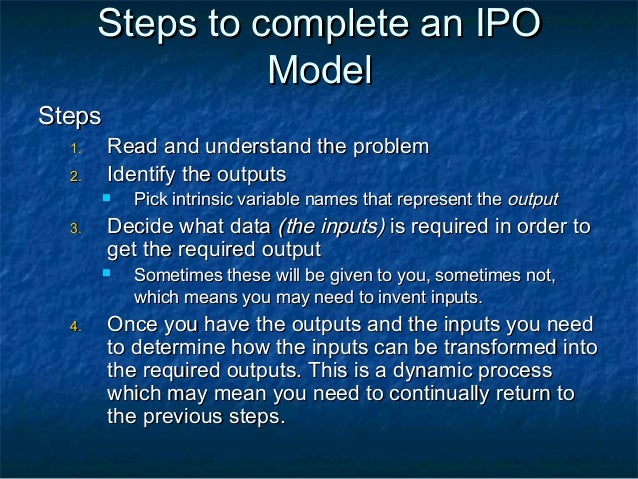