How will EMR do this?

The government initially announced its proposals back in December 2010. This legislation, three years in the making, is central to the government’s energy policy and its stated aims of keeping the lights on, keeping energy bills affordable and decarbonising energy generation.

Over the past three years, the Department of Energy & Climate Change (DECC) have issued an ever-increasing stream of papers. More recent papers have disclosed some key shifts in original thoughts on implementation, the latest being prompted by EU state aid guidelines.

EMR comprises the most fundamental change to the electricity market in a generation and, as 2014 begins, there is now a lot of detailed information available for generators and investors.

This article provides an update on what has been happening on the development of feed-in tariffs with Contracts for Difference (CfDs), a core part of the government’s renewables and non-fossil fuel strategy, albeit only  one aspect of EMR.

The first CfDs are  due to be awarded by the end of this year and with the Renewables Obligation (RO) being closed to new projects from 1 April 2017, will become the key incentive for development of renewable projects not supported by the existing small scale  feed-in tariff regime (which supports  ≤5MW renewable generation).

The fundamental basis of the CfD model is the provision of a pre-identified ‘strike price’ to the generator for all eligible electricity generation.

These prices for renewables are intended to be (at least until 31 March 2017, when the RO will close to new applicants) comparable to the support levels available under the RO (taking into account differences such as contract length and inflation indexation arrangements) adjusted to account for the increased certainty generators have from not bearing wholesale price risk which the government expects to be reflected in lower costs of capital.

Strike prices are also set by reference to the constraints of the Levy Control Framework (LCF) and expectations of future technology costs.

What is swap in forex market

The intention is that the new regime will deliver savings to consumers of around £5bn to 2030, relative to the current regime.

A common misconception is that the  strike price is the guaranteed revenue a generator will receive for each megawatt hour of generation; this is not the case.

Since the CfD payment relates to the difference (positive or negative) between the market-based reference price and the strike price, the generator takes the risk of not being able to find a route to market for its power at the reference price.

Even if a generator enters into a power purchase agreement linked to a wholesale market price which is the same as or similar to the reference price, generators are typically paid less than the wholesale price to take account of so called ‘balancing risk’ (the costs associated with having to balance renewables, much of which is intermittent generation) and cover other offtaker costs.

The points to note from the strike price table are that certain technologies incentivised under the RO are not going to benefit from CfDs as it stands at present, including dedicated biomass plants without CHP, biomass co-firing, standard bioliquids and geopressure.

In addition, some technologies (tidal range and large hydro >50MW) are going to have to negotiate CfDs at the time their projects are ready, and, of course, we have the ‘nuclear’ strike price – negotiable at the time of each project and which will be £92.50/MWh at Hinkley Point (although this is currently the subject of an investigation by the European Commission as to whether it constitutes illegal state aid).

It was initially envisaged that CfDs would at first be allocated on a first come, first served basis.

The system operator would run the application system and determine an applicant’s eligibility. When satisfied, it would instruct the CfD counterparty to enter into a CfD on prescribed parameters.

However, a recent consultation by the government has pointed to a different approach, which is giving rise to much debate – allocation on the basis of allocation rounds8.

The part of the LCF budget reserved for CfDs will be divided between:

The period of first come, first served allocation will not take place.

For  the ‘established’ technologies, there  will be constrained allocation (ie competition) from the very start of allocation (see below for how the  auction would work).

The government hopes to move to technology neutral auction processes in the 2020s, by which time the hope is that all low carbon technologies will be able to compete on an equal footing with each other.

The government’s rationale for this change of approach is three-fold:

The proposals for managing the CfD budget are consistent with the upper limits on annual spending on low-carbon generation (including CfDs, the RO and the feed-in tariffs scheme) within the LCF; and

The allocation process for the ‘established’ technologies is proposed to work as follows:

So effectively all of the ‘established’ technologies will be competing for what could be a limited pool of CfDs from the start of allocation at the end of this year.

The allocation process for the ‘less established’ technologies will not be on a competitive basis.

The government’s view is that these technologies cannot compete yet with the more established technologies. If all projects seeking support within this group can be accommodated within the allocated budget, they will receive support at the administrative strike price.

The government has, in addition, expressed its intention to reserve a minimum allocation of 100MW for wave and tidal stream projects during the current delivery plan period (ie until March 2019), given these technologies are still at the demonstration stage.

Further detail is awaited, with several publications due to be issued over the coming weeks, including on the issue of technology specific minimums (floors) or maximums (caps) and the detail of the rules that will govern the CfD auction process and the administration of budget and contract allocation.

In addition, the government is still considering how to treat biomass conversion and Scottish islands projects (the projects on the Scottish islands are widely seen as requiring more support because of the additional costs around grid infrastructure), both in terms of their technology grouping and in the context of wider, on-going work on the CfD allocation process.

In order to be eligible to even take part in the allocation process, it is envisaged that an applicant will first have to demonstrate that it has met a certain number of eligibility criteria:

Given that a project has no guarantee of being allocated a CfD, especially those using ‘established’ technologies and subject to competition, meeting these eligibility criteria, especially obtaining planning permission and a grid connection offer, are costly requirements.

In December 2013 DECC published an updated draft CfD along with an update  on the key provisions9.

The structure of  the CfD has changed since the first draft was published in August 2013 and there have been changes to certain provisions  to reflect industry feedback.

The CfD will be structured as a single instrument split into two components:

Delivery of project under a CfD and the milestone requirement

The CfD is structured to bring about timely delivery of projects.

Electricity market reform: an update on contracts for difference

At the end of the target commissioning window, the  contract duration begins to expire (ie  if a facility is not generating by that  point, there will be a loss of potential payments under the CfD).

At the longstop date, the CfD counterparty has the  right to terminate if the project has  not been delivered.

The government aims to protect against the CfD budget being allocated to speculative projects by way of the milestone requirement This is the first deadline in this delivery structure and requires provision of suitable evidence, demonstrating commitment to investment in the facility,  by a specified ‘milestone delivery date’.

The milestone delivery date in each case will depend upon the technology type involved but will in any case be within one year of the date of signature of the CfD.

Generators can demonstrate compliance with the milestone requirements in one of two ways:

If a generator fails to submit evidence by the milestone delivery date the CfD counterparty will have a right to terminate the CfD.

The government’s previously published approach10 was that projects were free to amend their capacity by 5% at the milestone delivery date and an additional 5% by the project’s longstop date without incurring financial penalty.

Further adjustment to a facility’s capacity was permitted up to 20% of the initial project capacity before a termination event would be triggered.

However, if a generator was  to reduce the capacity of its facility in this way, the project’s strike price would have been reduced in proportion to the extent  of under-delivery against this adjusted capacity.

Under the new provisions, generators are permitted to reduce the capacity of the facility by up to 25% of the installed capacity estimate.

If a generator makes such an adjustment, the contract capacity is immediately adjusted and the difference payments are then capped at the new reduced level. In order to trigger the flow of difference payments, generators will then have to deliver 95% of the reduced capacity estimate.

Provided that this 95% target is delivered, generators will receive the strike price in full.

The government has provided additional information on when and how generators are to post collateral – in the form of cash or a letter of credit from a qualifying issuer – in order to assist the CfD counterparty to manage risk of late or non-payment.

A generator will not initially be required to post collateral, but, when the reference price is above the strike price, will be required to make payments on the specified payment date.

Failure to do so will usually entitle the CfD counterparty to terminate.

A third ‘strike’ in a rolling 12-month period and the CfD counterparty can issue a collateral notice requiring the generator to post collateral equal to £10 multiplied by the expected MWh output of that facility over the 33 days of the payment period. When the generator has gone without a ‘strike’ for 12 consecutive months, the need for the collateral will fall away. Failure to post collateral in line with this notice will entitle the CfD counterparty to terminate.

One area of concern for generators has been security of payment from the CfD counterparty.

Our role in EMR

This is due to the government’s view that the legislative basis of the scheme, together with the restriction of the CfD counterparty’s purpose to entering into these agreements, should be comfort enough for generators.

The generator now also has a right to various legal remedies (such as injunction and specific performance) where the CfD counterparty is in breach of these undertakings.

Further protection for the generator is offered by changes to the events triggering termination. The operation of the insolvency termination event has been amended so that the CfD counterparty will not have a right to terminate if it is its own non-payment that causes the generator’s insolvency.

It is hoped by government, and the renewables industry, that the CfD regime will provide sufficient confidence for investors to commit to the UK’s much needed low carbon generation. 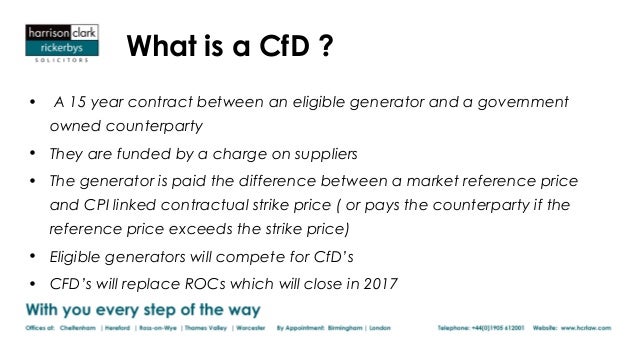 The government has invested significant time in the development of the CfD mechanism and in consultation with industry, including on the standard terms and conditions and the proposed allocation mechanisms.

However, there is still an additional layer of detail outstanding, and it is only when this additional detail is published that investors will get a clear understanding of this key incentive. Industry concern remains, particularly around the allocation of the CfDs and how technologies with different development costs will compete against one another.

The industry response will be critical to the success of the government’s strategy for keeping the lights on.

The government sees biomass as a transitional technology.

For higher capacity projects, support for the additional MW will be set at the offshore wind strike price.