China’s NIO is arguably the furthest along of all the flashy electric car startups that have formed over the last few years. Now it wants to go public in the United States on the New York Stock Exchange, according to a filing with the SEC this past week.

But a close inspection of that document shows the company faces potential roadblocks in both demand for and production of its first car, and it also exposes that the company discovered a crucial financial problem in the months leading up to the IPO.

NIO has come a long way for having such a short history.

Founded in 2014, it quickly (in automotive industry timescale) designed and produced a small batch of an all-electric supercar called the EP9, which has already broken a few EV and non-EV production car records.

Electric Car Charging, How long does it REALLY take?

The EP9 also autonomously lapped the track at Circuit of the Americas in Texas in late 2016, which helped establish the company’s ambitions to develop self-driving technology.

The company’s first production car, a seven-passenger SUV called the ES8, debuted in December 2017 and went into production in China earlier this spring. It costs about half the price that a Tesla Model X commands in the country, and NIO started shipping them to customers there in June.

A smaller five-passenger SUV called the ES6 is already in development, with deliveries starting in 2019. In the push to get these cars out the door, NIO’s global ranks have swelled to over 6,000 employees.

NIO is backed by big names, too: Tencent, Baidu, and Sequoia Capital all have stakes in the company. SoftBank is even reportedly interested in buying some of the public shares.

It will need that backing, as the company also has big ideas about changing the car owning experience, from “NIO houses” (which mix service centers with cafe vibes), to battery-swapping technology, to a cute AI-powered assistant on the dashboard.

“The new era, in which smartphones and apps play a much bigger role in people’s daily lives, gives companies like us a great opportunity to revolutionize the automobile industry.”

The goals of putting a car into production and launching a public offering in the US are shared by a number of NIO’s most notable peers, but the company is about to become the first electric car startup to follow Tesla in doing both.

Faraday Future, Lucid Motors, SF Motors, Byton, Rivian; all of these fellow startups are still not in production, and many of them are still clamoring for funding.

But the F-1 form that NIO filed with the SEC this week shows that it still has plenty of challenges ahead.

NIO has shipped just 481 ES8s since the first one left the factory on June 28th, and so its first car has only brought $7 million in total revenue to the company to date.

A slow start might be helpful, according to Doug Betts, who leads JD Power’s global automotive division. “I think if they’re smart they’ll be very careful about trying to have a massive launch and deliver lots of vehicles because the worst thing that could happen to them is quality problems with the early deliveries,” he says. “They need those people to be really excited about what they got to start to build some momentum.”

But even if that’s true, demand for the ES8 isn’t exactly off the charts.

NIO says it has only racked up about 17,000 reservations since the SUV’s debut in December, a paltry number in light of the fact that China is the biggest EV market in the world right now, with sales touching 1 million per year.

If early customers are wowed by the ES8 and the SUV becomes a hit, that could actually complicate things, according to NIO’s own filing.

While the company’s goal is to eventually be able to make customer’s vehicles to order within three to four weeks, NIO says in the F-1 that, if all 17,000 existing reservations were to convert to orders today, it would take the company “six to nine months” to fulfill them.

The source of this lag is that NIO isn’t actually making the ES8s itself. NIO currently contracts its manufacturing out to a company called Jianghuai Automobile Group, or JAC.

NIO says it plans to eventually build its own cars at a Shanghai factory that’s currently in development. But it won’t be open until at least 2020, so NIO has contracted JAC to build the ES8 and the forthcoming ES6 in the meantime. And NIO admits early on in the document that its “ability to develop and manufacture a car of sufficient quality and appeal to customers on schedule and on a large scale is unproven and still evolving.”

Outsourcing manufacturing is a big reason why NIO is already in production when competitors like Faraday Future and Lucid Motors have struggled to secure funding for their own factories, Betts points out.

But the deal comes with strings, according to the F-1. NIO is paying JAC a fee for every vehicle that the manufacturer makes.

NIO also has to compensate JAC for any operating losses that the manufacturing plant incurs over the first three years of the deal, dating back to April 2018 when production began. NIO has already paid JAC 100 million yuan to date, or about $14.5 million.

Are european options traded on the nyse

(Two thirds of that payment are “compensation for losses incurred in the second quarter of 2018,” while the rest is “prepayment for manufacturing and processing fees and potential future losses in the third quarter of 2018.)

NIO is farther along than any other well-known EV startup not named Tesla. At its inception, though, production of NIO’s first car faces a bit of a catch-22.

Since early demand for the ES8 is somewhat light, NIO has some breathing room to make sure it gets the process right. But if demand stays too low, the company will have to pay more money to JAC.

On the other hand, if demand spikes, NIO could face a nearly year-long production backlog that might scare away potential customers.

NIO has lost $1.6 billion over the last three years as it developed the EP9 and ES8, and it estimates $1.8 billion in losses over the next three.

Securing more money is obviously one upside to going public on the NYSE, and investors here might be more willing to meet the company’s proposed raise of $1.8 billion, according to Sam Abuelsamid, a senior researcher at Navigant Research.

“US investors are more interested in an EV startup like this that ultimately has global aspirations, especially based on the love they’ve shown to Tesla,” he says.

“There’s interest in a nontraditional car company that is looking beyond just building and selling cars, but looking on the overall digital ecosystem around the car as well, and being seen as more of a tech company.”

That said, NIO admits in its SEC filing that the company has not completely settled on where all that money would go. Much of it would be split between R&D, sales and marketing costs, and a large portion will go to manufacturing and supply chain.

But NIO says there is a certain amount of the potential IPO proceeds that it has not figured out what to do with, and this money’s fate will be solely up to management.

“You will not have the opportunity to assess whether the proceeds are being used appropriately before you make your investment decision,” the company writes.

“You must rely on the judgment of our management regarding the application of the net proceeds of this offering.” It’s not yet clear how exactly NIO would split the potential $1.8 billion — the F-1 that was filed is preliminary, and this is one of the sections that remains incomplete.

In fact, NIO’s IPO won’t offer potential shareholders much say in the company overall. Each share being sold in the public offering comes with one vote. Tencent’s shares each come with four votes, while NIO’s Bin Li (owns shares that come with eight votes each.

“Due to the disparate voting powers associated with our triple classes of ordinary shares, Mr. Li and Tencent entities will have considerable influence over important corporate matters,” the company writes. This structure, it says, “will limit [investors’] ability to influence corporate matters.”

The F-1 also shows clear signs of growing pains in the push for an IPO.

The company admits its existing financial reporting controls “have not kept pace with the expansion of our business.” Worse, the company says that it identified a “material weakness” while prepping for IPO with a Beijing branch of accounting firm PricewaterhouseCoopers.

“If you don’t even have time to understand the GAAP before filing for IPO there’s definitely some rush.”

NIO says it has made a “significant number of adjustments” and “plan[s] to take measures to remedy this control deficiency.” But the company adds it can “give no assurance that our planned remediation will be properly implemented or will be sufficient to eliminate such material weakness.”

“I don’t know for sure if that’s a pretense for potential trouble,” Zhao says, but investors will likely have to weigh their faith that the major investment banks underwriting the IPO — which include Morgan Stanley, Goldman Sachs Asia, Citigroup, and others — will provide enough scrutiny to make sure NIO’s books are right.

Why an IPO in the US?

NIO is not a total stranger to the United States. It houses over 500 employees in San Jose, California, with most of them focused on design, research, and development. NIO says it will eventually sell its cars outside of China, too.

But that won’t happen for a few years. So why would NIO want to go public in a market where it currently offers no tangible product?

As Abuelsamid said, there’s a chance NIO thinks there’s simply more interest in the US from investors who are familiar with tech-forward companies.

Beyond that, though, Zhao says another reason is that NIO’s corporate structure prohibits it from being listed in Asian markets. NIO Inc, which is the entity that will be listed on the NYSE, is actually registered in the Cayman Islands. 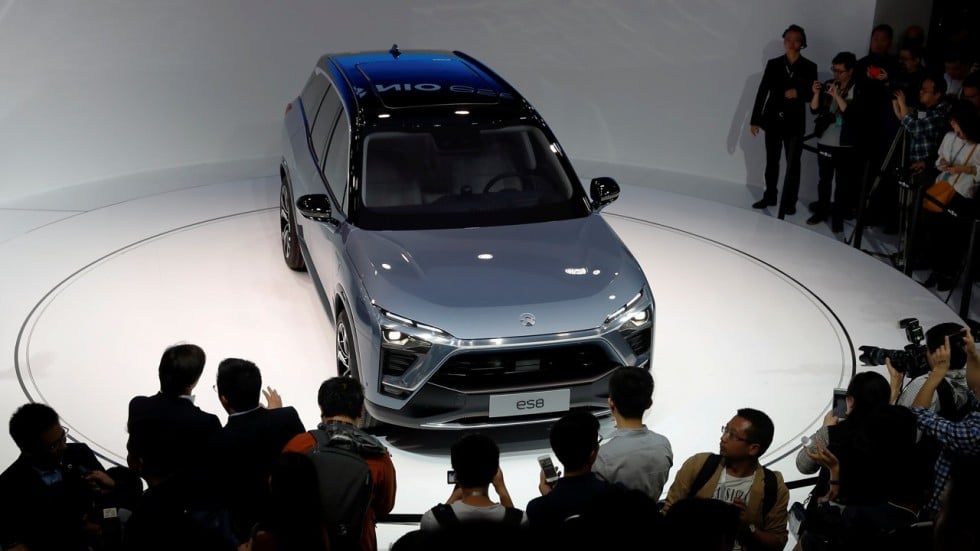 A web of subsidiaries in China, the US, and Hong Kong exist below it that were formed for particular purposes, like R&D or sales.

The NYSE allows these kinds of corporate structures, while China does not, Zhao says.

Zhao says Chinese companies like to go public in the United States because it can show that you’re ready to face greater scrutiny from the financial world. “You expose yourself to this more sophisticated financial market, so it’s a signal that you’re willing to bond yourself to more transparency,” she says.

Spreading into the US could also help NIO separate itself from the rash of EV startups in China, where there are already close to 500 with no signs of stopping.

But Zhao cautions that a multinational approach can stretch a company thin.

“Yes, you are more global, you’re able to tap into all these resources, technologies, and contacts. But you also increase the coordination costs. To what extent you can get things done quickly and effectively with such a spread out network is not clear,” she says.

NIO, Zhao says, may feel pressured to stand out from from the glut of startups in China. At the same time, NIO might also want to capture what’s left of the investment momentum that has vaulted so many startups to (and beyond) the $1 billion mark in the US.

“So many companies are trying to ride the wave,” she says.

“Which ones remain after the wave recedes, we don’t know.”