He originally started boxing to try and answer one simple question: "What does it mean to be strong?".

Since then he has formed a rivalry with Miyata Ichirō, Sendō Takeshi, Mashiba Ryō, a brotherly bond with Takamura Mamoru, Aoki Masaru, Kimura Tatsuya, and a deep trust for his coach, Kamogawa Genji, whom he now aims to become a world champion for to honor the coach's teachings.

His surname is Makunouchi.

In Japan, surnames are listed before given names.

During the time when his father was missing out in the sea, Ippo went everyday to the shore to wait for his return. He believed his father's words that upon his return he will never leave Ippo and Hiroko again.

Although his father never returned, Ippo was able to satisfy himself that his father fulfilled his promise by finding the cap his father wore. 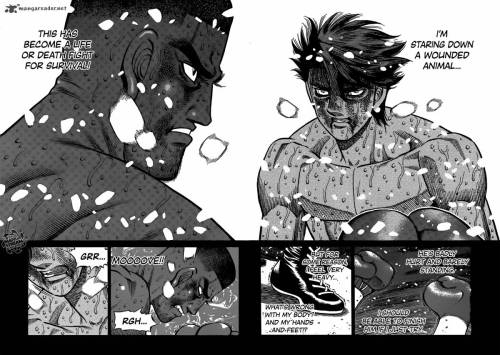 After his father died, Ippo grew up assisting his mother with the family fishing boat business. During his school days, when ever something happened at school, he would come home, hiding his feelings by saying that he was okay.

It all started that day when Ippo was stopped being bullied after school and going home crying, when he was sixteen. Being saved from the bullies by a pro boxer named Takamura Mamoru. He was introduced to the sport of Boxing by him after seeing his success.

Ippo decided to follow the same steps and get in the ring, with the purpose of answering "What it means to be strong?". Takamura thought he was underestimating boxing but Ippo clearly was determined about it, he wanted to change.

Therefore Takamura proceeded on showing him a method worth of qualifying in the ring, to catch at least 10 leaves. Over a few days, he succesfully was able in catching 10 leaves, managing to do that with only his left. Takamura was impressed that a mere amateur managed this, and happily showed him to the Kamogawa Boxing Gym which he also trains to learn boxing. He was underestimated at first due to his appearance and kind personality but after sparring with Miyata Ichirō who was seen as a prodigy yet to be pro, in which he lost, he got accepted for showing great potential and power.

He had a rematch again and Ippo this time won successfully.

Coach Kamogawa Genji took him under his wing as his one and only to be taught student aside the natural born Takamura. He took the professional test and passed, and he debuted, winning and advancing after two matches for the "East Japan Rookie King Tournament".

Ippo winning against all the opponents given, that some remained throughout the story and most of the rest having retired. This set up his rivalry with Miyata to have a real match one day be in the professional ring. This being the Rookie King Tournament: Finals in which Miyata failed to reach and meet Ippo as promised in the pro ring.

Instead for the Finals he faced Mashiba Ryō, who defeated Miyata. Ippo was extremely furious due to a foul at first but as he learned more about his opponent and his intentions of fouling he came to a new understanding, that the situation isn't as he thought it is, after accidentally talking bad about him infront of his sister, Mashiba Kumi, who is the girl Ippo is interested in and keeps seeing her work in the nearby bakery. Ippo with a broken fist came victorious over the difficult opponent that could not give up no matter what due to his personal reasons and protecting his only family left, Kumi, who in the meantime she was heated towards Ippo due to the match.

Ippo continued his road to become champion since there are ways they could face each other there again. He then faced the West's Rookie King, the "Rocky of Naniwa" in the All Japan Rookie King Tournament and became victorious, earning him the "Rookie King of the Year" as well.

Will Ippo ever become world champion?

As the dark feelings cleared, Ippo came back stronger with a new move that his body allowed him to have, the Dempsey Roll. Winning his comeback match, he went back and faced the champion once again, this time being "Naniwa Tiger" Sendō Takeshi, a rival long awaited to be fought again.

Ippo won the difficult match successfully and finally became the national champion. Kumi and Ippo's feelings for each other remained silent, even after some difficult times such as him winning over her brother, and his match with Kimura, they still continued having this outline relationship, although none expressing their feelings yet. Ippo in the meantime defended his title threetimesbefore more challengers found ways to break his signature weapon, the Dempsey Roll.

As the event came closer, the promise begun to fade. Miyata was trapped inside the wheel of destiny, as a boxer from the past had appeared. The match failed to happen for the third time. This saddened Ippo to the verge of retiring but the words of Iimura Mari made him remember the reason he started boxing, to know what it means to be strong.

He went and apologised to Kamogawa and decided they will try another path to the world.

They had unique boxing styles, showing him the world is vast with many different types of boxers. Ippo had a difficult time dealing with them, especially with the geniusWally. He defeated them successfully each with a lesson for himself and improved drastically once again as a fighter and gained plenty of more experience, but he was lacking elsewhere, as the coach of Wally stated, Kamogawa and Ippo were headed into a great disaster. Rivals also progressed with him, by their own road to glory.

Ippo pushes forward to the world after his succesful seventh title defence, getting matched with the man ranked 2nd in the world, Alfredo Gonzales. Takamura suspected that Ippo has grown weaker. The day of the match happened, and he failed to deliver. It was nowhere near easy for both, Ippo did great damage to the world ranker but there was a gap.

Will Ippo ever be world champion?

Sometime after, his love interest Kumi told him it is better to stop boxing. Ippo without hesitating did in fact promise her the next time he loses he would retire.

That caused a lot of thoughts of him being broken. The doctor approved that he's perfectly fine but due to getting hit a lot he's on the verge of being broken. Takamura told him there is a line that he must cross in order to advance to the rest of the world. He witnessed it first hand with the beast matches of his rivals and Takamura, attempting to understand what he meant, Ippo still wasn't nowhere near.

He finally succeeded over the course of 10 months to improve the Dempsey Roll to a greater height, as well becoming far stronger. Takamura kept reminding him about that line, if Ippo will deliver in his comeback match. His opponent being a southpaw Antonio Guevara. Dealing once again great deal of damage, Ippo was ready to unleash the new weapon that he and his coach had built but with great sorrow as Ippo felt during this whole time training that something was wrong with him, he still pushed forward.

Ippo had lost once again shockingly by only the fourth round without even showing a glimpse of the new evolved Dempsey Roll. After all the hard work he went through and his coach, it was finally over.

He decided to retire from boxing upon the promise of Kumi.

Ippo then scouted for boxers to take under his wing and found Taihei who is actually the younger brother of Aoki and eventually Kintarō Kaneda, who both joined the Kamogawa Boxing Gym as Ippo's first actual students.

While training his two new students, Ippo experienced matches and words from his former coach that opened Ippo's mind and made him think back on his previous mistakes.