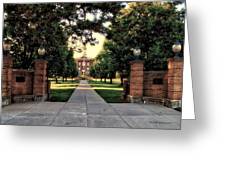 For other uses, see WIU (disambiguation).

Western Illinois University was founded in 1899. The land for the university was donated to the state of Illinois by Macomb's Freemasons (Illinois Lodge #17).

Macomb was in direct competition with Quincy, Illinois, and other candidates as the site for a "western" university. The Illinois legislature selected Macomb as the location. University administrators uncovered evidence of the Freemasons' efforts on Macomb's behalf when they opened Sherman Hall's (the administration building) cornerstone during their centennial celebrations.

Today, the Macomb campus consists of 53 buildings over 1,050 acres (424.9 ha). Sherman Hall is listed on the National Register of Historic Places. Western's presence in the Quad Cities spans more than 40 years. In Fall 1960, the university offered its first undergraduate course in the Quad Cities.

Western Illinois University is composed of four academic colleges: Arts & Sciences, Business & Technology, Education & Human Services, and Fine Arts & Communication, in addition to an Honors College the School of Extended Studies, which includes nontraditional programs. Ranked 413 among the best public and private colleges and universities, from the student's point of view in Forbes.

95% of all courses are taught by full-time faculty.[5] The University offers a Doctorate of Education in Educational Leadership (Ed.

Western's Cost Guarantee Plan is a four-year fixed rate for tuition, fees, room and board that remains in place as long as students are continuously enrolled.

Western was one of the first institutions in America, and the first state university in Illinois, to offer the guarantee.[7] WIU's program served as a model for all other Illinois state universities through the state's "Truth in Tuition" program; however, Western is the only public university in Illinois that includes fees, room and board in its Cost Guarantee.[7] Western Illinois also offers the Cost Guarantee for graduate students enrolled in a degree program, as well as to transfer students earning an associate degree.

Those students who transfer to WIU the following semester upon completing their associate degree will receive the previous year's cost guarantee rates.[7]

This program is designed to ease the transition from high school to college, and fosters the participation of FYE students in co-curricular events such as concerts, art exhibits, and guest lectures. In addition to their FYE program, WIU also provides a TYE (Transfer Year Experience) program to interested students. This program is aimed at introducing transfer students to the services and resources on campus within a residential setting.[8]

Five libraries make up the WIU Libraries system.[9] The current Dean of Libraries is Michael Lorenzen.[9]

Malpass Library in 2001) is the main branch of the library system. Designed by Gyo Obata, Malpass Library stands at six levels high and 222,000 square feet.[10][11] Other WIU libraries include the Music Library, Physical Sciences Library, Curriculum Library, and the WIU-Quad Cities Library (Moline, Illinois) that was opened in the late 1990s to support WIU's growing presence in the Quad Cities.

The library's one millionth volume, Biographical Sketches of Joseph Smith, the Prophet, and His Progenitors for Many Generations, by Lucy Mack Smith, was added in 2002.[17]

Western Illinois University is home to the Centennial Honors College, which was founded in 1983 in order to attract more adept students as freshmen, as well as an avenue by which the most talented students at Western Illinois could distinguish themselves from other students at the university.

Accordingly, the GPA admissions standard for the Centennial Honors College is nearly a full grade point higher (0.9) than the minimum GPA of any other college at the university, the second being the College of Business and Technology. Honors students complete a series of courses and projects unavailable to average students studying at Western Illinois, and are also eligible for a host of exclusive foundation scholarships.[18]

Due to the intense nature of honors coursework, students vying for a spot in the Centennial Honors College should be prepared to dedicate additional time and effort to their schoolwork.

Honors can be completed in many of the majors at Western Illinois, but there has not been a curriculum fashioned for every discipline.[18]

Consistent with its mission, the Macomb Honors Program provides a curriculum consisting of special tutorials, seminars, guided studies, and research projects, as well as opportunities to develop leadership and professional skills and participate in community and social services.

A unique curriculum, honors faculty, and opportunities for leadership and service are integral to the honors experience.

These are critical reasons to participate in the Honors Program for students seeking to maximize their collegiate years.[18]

The prestige associated with the Centennial Honors College has led many to believe that graduates from the Honors Program receive preferential job placement, and applications to graduate schools are viewed more favorably than those of typical Western Illinois students.[18]

Western Illinois University-Quad Cities (WIU-QC) is located in the Quad Cities metropolitan area, a region of four cities in northwest Illinois and Southeastern Iowa, and is located along the Mississippi River in Moline, Illinois.

WIU-QC was previously an upper-division commuter site located on John Deere Road in Moline, Illinois. The branch began a move to the Moline riverfront in 2012, and has expanded to serve all levels of the college experience, from the freshman year to professional development. WIU-QC offers classes at the undergraduate, graduate, doctoral, and post-baccalaureate levels.

Riverfront Hall, built in 2012 on the site of the former John Deere Tech Center, houses the College of Business and Technology, including the School of Engineering formerly located in the Caxton Building in downtown Moline. In 2014, the Quad Cities Complex was added, three connected buildings which house the Colleges of Arts and Sciences, Education and Human Services, and Fine Arts and Communications, as well as the library, student services, and administration.

WIU has been repeatedly recognized as one of the “Best in the Midwest Colleges” by The Princeton Review.[21]

In 2016 and 2017, WIU saw a major downsizing and exodus of faculty and staff as a consequence of massive state budget cuts and declining undergraduate enrollment.[22][23]

The Western Courier is the school newspaper at Western Illinois University.

It is published each Monday, Wednesday and Friday during the academic year, excluding holidays and breaks. Summer publication is on Wednesdays only. The Western Courier is the only officially recognized student newspaper on campus and is distributed free at 80 locations throughout the campus (including residence halls) and throughout the Macomb, Illinois business community.

Western Illinois also has a student-run radio station, 88.3 The Dog, WIUS-FM. The radio station can be heard across McDonough County on 88.3 FM, as well as online through their website (883thedog.com) and their mobile apps.

NEWS3 is Western Illinois University's student-produced television newscast, broadcasting and streaming live 30-minute newscasts on Tuesdays and Thursdays at 4 p.m. The newsroom, studio, and control room are housed on the third floor of Sallee Hall.[24]

Inspired by the surrounding “vast golden prairie strewn with purple coneflowers,” Western Illinois University adopted purple and gold as its official colors in 1902. WIU is the only non-military institution in the nation with permission from the Department of the Navy to use the United States Marine Corps Official seal and mascot, the Bulldog.

As of the Fall of 2009 the men's and women's teams were unified under the Leathernecks name. Previously, the women's teams and athletes at the school were known as Westerwinds.

WIU: A Global Leader in the Education of International Students

Western Illinois University was a member of the Illinois Intercollegiate Athletic Conference from 1914-1970.

Western's Office of Public Safety started as Campus Safety and Security in 1956, replacing the security guard era. The department employs 24 full-time officers and operates 24 hours a day, seven days a week from Mowbray Hall on the WIU campus.

In addition to routine patrol, OPS dispatches officers to the street on foot and bicycles, as well as in the residence halls nightly. Officers also perform such duties transporting money from campus buildings to local banks; providing security to athletic events and concerts; providing traffic control; providing transportation to the hospital; conducting building safety checks; hosting educational and safety-related programming; and supervising student patrol and emergency medical services on campus.[26]

An artist's rendition of WIU-QC
Related articles
MOST POPULAR