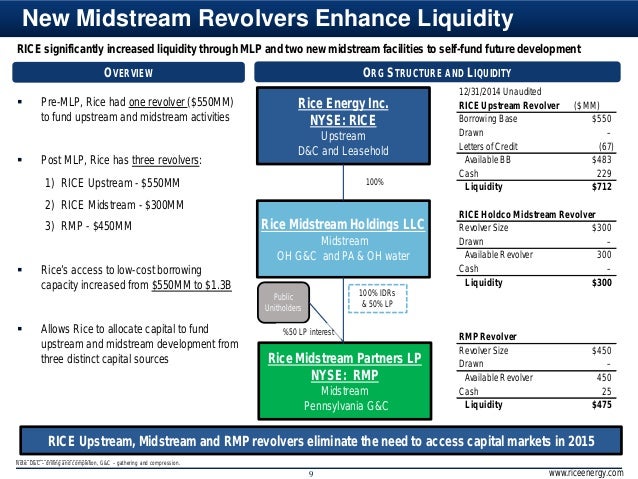 On December 8, 2014, Rice Energy Inc. (RICE) announced the initial public offering (or IPO) of Rice Midstream Partners LP (RMP). Rice Energy is an independent oil and gas company whose assets are focused in the Marcellus and Utica Shales.

Rice Midstream Partners will acquire and operate the midstream assets in these regions.

More about the IPO

This included the exercise in full by the underwriters’ option to purchase an additional 3,750,000 common units, also known as an over-allotment option or a greenshoe option.

A greenshoe option is when, in an underwriting agreement, the issuer (Rice Energy, in this case) agrees to give the underwriter the right to sell investors more shares than originally planned. This typically happens when the demand for the security issue proves to be higher than anticipated.

In the case of Rice Energy, the company sold an additional 3,750,000 common units.

The net proceeds raised from the IPO was $441.6 million.

The partnership began trading on the New York Stock Exchange on December 17, 2014, under the symbol RMP.

The following part talks more about the new structure of the company as well as Rice Midstream’s (RMP) future plans.