Furthermore, involvement of cranial nerves was described as rare complications of SS. Methods.

We reported 2 cases: the first one was a 40-year-old woman who developed neuritis of the left optic nerve as presenting symptom few years before the diagnosis of SS; the second was a 54-year-old woman who presented a paralysis of the right phrenic nerve 7 years after the SS onset. An exhaustive review of the literature on patients with cranial or phrenic nerve involvements was also carried out. Results. To the best of our knowledge, our second case represents the first observation of SS-associated phrenic nerve mononeuritis, while optic neuritis represents the most frequent cranial nerve involvement detectable in this connective tissue disease.

Trigeminal neuropathy is also frequently reported, whereas neuritis involving the other cranial nerves is quite rare. Conclusions. Cranial nerve injury is a harmful complication of SS, even if less commonly recorded compared to peripheral neuropathy. Neurological manifestations may precede the clinical onset of SS; therefore, in patients with apparently isolated cranial nerve involvement, a correct diagnosis of the underlying SS is often delayed or overlooked entirely; in these instances, standard clinicoserological assessment is recommendable.

Sjögren's syndrome (SS) is characterized by chronic inflammation of exocrine glands, such as lachrymal and salivary glands, leading to xerophthalmia and xerostomia [1]. Moreover, at least one third of patients present with systemic extraglandular neurological, articular, pulmonary, or gastrointestinal manifestations [2]. The prevalence of neurological manifestations in SS varies between 2% and 60%, mostly pure or predominantly sensory polyneuropathies [3]; therefore, a careful neurological evaluation is usually recommended in the global assessment of SS patients [4].

Apart from central nervous system (CNS) involvement, other neuropathic patterns are polyradiculopathies, mononeuritis multiplex, autonomic neuropathies, and cranial neuropathies [5]. These latter are not rarely observed in SS patients, often as presenting symptom in the absence of overt sicca syndrome [6, 7], thus the differential diagnosis may be quite difficult.

The pathogenic mechanisms responsible for SS neurological involvement are unknown. Many hypotheses have been considered, namely, the direct infiltration of the central nervous tissue by lymphocytic cells, the vascular injury due to antineuronal and anti-SSA antibodies, and/or the ischemia secondary to small vessel vasculitis [8].

In the present paper, we described two patients with SS, who presented mononeuritis: the first patient presented optic neuritis preceding the clinical onset of SS and the second developed a very unusual neuritis of the right phrenic nerve.

Finally, a review of the literature on cervicocranial neuritis in the course of SS was carried out.

A 40-year-old woman referred to our Rheumatology Unit in January 2012, in the suspicion of an autoimmune disorder.

Since 2006, she presented episodes of left optic mononeuritis, responsive to steroids; thus, she was undergoing a neurologic follow-up for a hypothetical multiple sclerosis. The first magnetic resonance (MR) of the brain and the spine showed a solitary T2-hyperintense, gadolinium enhancing lesion of the retrobulbar and intracanalicular left optic nerve, suggestive for demyelinated plaque; anyway, the subsequent yearly MRs did not show other lesions.

Furthermore, since 2007 polyclonal hypergammaglobulinemia, slight reduction of C3 fraction of complement, and serum antitransglutaminase and anti-SSA/SSB autoantibodies were found. However, the patient did not present a clinically overt sicca syndrome; thus SS remained misdiagnosed until 2012.

Only after the patient referred to our Rheumatology Centre, a deeper check-up was performed, namely, salivary glands scintigraphy that showed mild salivary hyposecretion basally and after lemon juice stimulation and Schirmer's test that was bilaterally positive (<5 mm).

On these bases, a diagnosis of SS, classified according to the new American College of Rheumatology/Sjögren's International Collaborative Clinical Alliance (ACR/SICCA) criteria [9], with recurrent, unilateral optic neuritis was done. Antibodies targeting aquaporin-4 (NMO antibodies) were not tested for in the serum because the test was not available; anyway, the patient did not show acute myelitis or spinal cord MRI lesions.

Moreover, the possibility of optic neuritis not SS-related, but incidental only, cannot be excluded.

No chronic treatment was prescribed, except steroids in the case of the further two episodes of mild optic neuritis.

A 54-year-old woman with diagnosis of SS-scleroderma overlap syndrome from 2005 referred to our Rheumatology Unit in January 2013.

She did not present skin involvement, while an overt sicca syndrome was observed. Serum anticentromere autoantibodies were present, without anti-ENA specificity; Schirmer's test was clearly positive (<1 mm).

Videocapillaroscopy revealed an “early” scleroderma pattern; salivary glands echography evidenced a complete atrophy, while chest high-resolution computed tomography did not show interstitial lung disease, but only hypotonia of oesophagus. A labial salivary gland biopsy was not performed, since the patient refused it; thus, the diagnosis of primary SS, classified according to ACR/SICCA criteria [9], cannot be formulated.

Since 2012, the patient progressively complained of fatigue and dyspnoea in the absence of new radiological pulmonary alterations; therefore, oxygen therapy (3 L/min) was necessary.

Forced vital capacity was 50% of normal value, whereas heart echography was normal. In November 2012, the diagnosis of paralysis of right diaphragm was suspected on the bases of clinical symptoms and radiological alterations at standard chest X-ray and then confirmed by the detection of mixed demyelinated/axonal damage of right phrenic nerve at electromyographic examination.

A modest axonal polyneuropathy of the arms and the legs was also present, while neck MR excluded compressions of nerve roots.

Treatment with steroids at 1 mg/kg/day was prescribed without significant improvement; thus the patient was referred to our Rheumatology Unit, where an immune-mediated mononeuritis of the right phrenic nerve was suspected. Therapy with monthly cycles of intravenous immunoglobulin (50 g/day, for 3 consecutive days) was decided. After the third cycle, the patient experienced reduction of dyspnoea (from 10/10 to 6/10 of modified Borg scale), improved physical performance, and tapering of daily oxygen therapy, without disease exacerbation up to date.

Review of the Literature

An exhaustive revision of the literature was done by including all case reports and case series of SS patients with cervical-cranial neuritis present in PubMed database (Table 1); reports regarding SS associated with other connective tissue diseases were excluded. 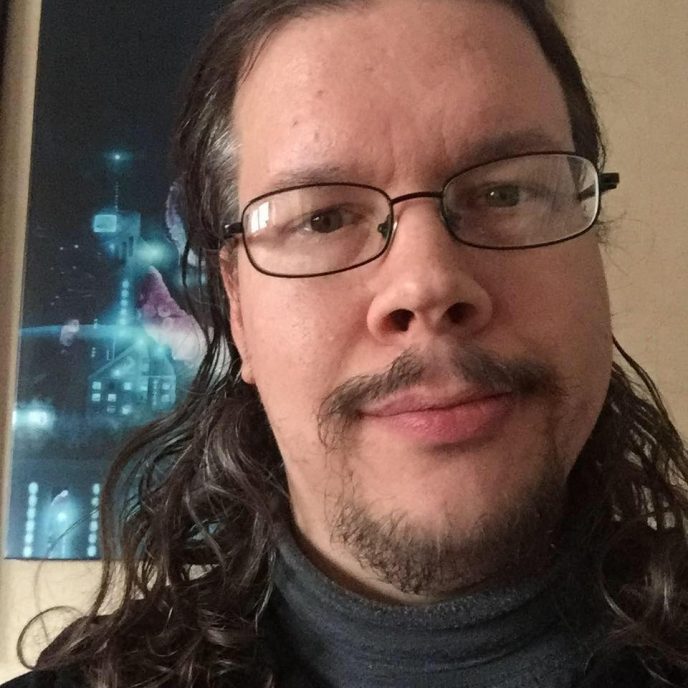 Ninety-five reports with a total of 267 SS patients with different types of cranial neuritis during their clinical history were found [4, 7, 10–101]; moreover, 68 reports with available data referred to 160 patients were analyzed in detail. In particular, the female/male ratio was 20.8, while the mean age of adult SS patients is 48 ± 13.2 years, consistently with recent SS epidemiological findings [102, 103].

Of interest, considering the 75 cases with available data, the first episode of cranial neuritis was contemporary to SS diagnosis in 40% of patients, while neuritis proceeded in 24% (range 1–35 years), or followed SS diagnosis (range 1–14 years) in 36%, respectively.

Review of the literature regarding Sjögren's syndrome (SS) patients with cranial neuritis.

Open in a separate window

Alterations of the I cranial nerve were rarely observed; to date, only 4 cases were described [14, 59]. However, it may be supposable that this complication is often underdiagnosed or misdiagnosed in SS patients because of the concomitant olfactory and gustatory dysfunctions secondary to mucosal dryness.

In a few cases, neuritis was associated with CNS involvement, such as brain vasculitis [34, 77], acute transverse myelopathy [43, 67], myelitis [77, 80, 83, 90], aseptic meningitis [70], or multiple sclerosis-like features [80, 91]. Response to treatment was frequently effective, especially with the use of immunosuppressors; however, an irreversible visual impairment was occasionally reported [45, 63, 79, 95]. From a pathophysiological point of view, optic neuropathy may be related to immune-mediated small vessel vasculitis [70]; otherwise, it may be due to demyelinating disease being included or not in the neuromyelitis optica spectrum disorder [91].

The majority of published papers refer to case reports.

[18] investigated the presence of CNS involvement in a cohort of more than 200 SS patients, referring to the John Hopkins Medical Institute between 1980 and 1983. The 20% of these patients showed CNS complications, including 16 cases of cranial nerve involvement. In particular, 7 patients presented transient monocular optic neuritis, with new episodes of neuritis of the other eye in 5 cases.

Gono et al. in 2011 [91] reported CNS complications in 56/82 SS patients, 13 of them with optic neuropathy. The spectrum of clinical features was heterogeneous, but the majority of patients presented focal or multifocal alterations preceding the diagnosis of SS. Moreover, the authors underlined that these disease complications could mimic multiple sclerosis features with possible misdiagnoses; on the other hand, they stressed the importance of screening SS patients in presence of neurologic manifestations.

The prognosis is generally good, with complete resolution within few weeks after steroid treatment; however, possible recurrent episodes have been reported [36, 38, 41, 48].

In 13 cases the neuritis was bilateral [12, 14, 31, 44, 60, 94], while in 2 it was combined to dorsal roots ganglionitis [21, 25]. The latter association may suggest a possible pathogenic mechanism of trigeminal injury that is an immune-mediated neuron death in the sensory Gasser ganglion [60].

The prominence of the sensory symptoms or the presence of several SS patients with pure sensitive trigeminal neuritis in literature may reinforce this hypothesis [14, 26, 31, 40, 46].

Considering large cohort studies, Mellgren et al. [29] retrospectively investigated the features of neural involvement in a cohort of 110 SS patients complicated by neuropathy, referred to Mayo Clinic between 1976 and 1988.

In 2005, Mori et al. [60] described 92 Japanese patients with SS and neuropathy; to note, in 93% of cases the diagnosis of SS followed the onset of neural disorders. Pure sensory trigeminal neuritis affected 15 patients (6 with bilateral involvement), while 5 individuals showed multiple cranial neuropathy patterns. Overall, the prevalence of trigeminal neuropathy in SS patients seems to vary depending on ethnic factors.

Anyway, the involvement of V cranial nerve in the course of SS is not rare; moreover, it tends to be recurrent or to stabilize and to be less frequently responsive to steroids than other cranial neuritis [101].

In 1935, Henrik Sjögren himself was the first author to mention cranial nerve involvement in SS patients, describing a case with bilateral facial palsy [9]; up to date, other 13 cases were described [18, 28, 35, 52, 59–61, 78, 86, 91], with bilateral involvement in only one patient [28]. In other cases, facial involvement presented as multiple cranial neuritis [7, 13, 17, 48, 82], usually associated with trigeminal and/or glossopharyngeal nerve injury, generally responsive to steroid treatment.

Neuropathy of the cochlear nerve is rarely reported in the literature. Except one [41], they were described as isolated involvement [4, 18, 59].

Significant data regarding prognosis were lacking.

A few reports described SS patients who presented difficulty of swallowing, which is a symptom of glossopharyngeal neuropathy [13, 17, 36, 48, 51, 60, 76, 91]; this nerve involvement was always reported in cases of multineuritis. Also the vagus and the hypoglossal nerves were rarely mentioned in the literature and invariably associated with the IX cranial nerve [48, 51, 60, 76, 91].

All cases seem to be related to transient, often recurrent episodes of multineuritis, generally responsive to treatment. Finally, the XI nerve involvement was never reported.

Phrenic nerve is not a cranial nerve; it originates in the neck from C3–C5 cervical nerves, containing motor efferent fibres to diaphragm and sensitive fibres from pericardium and visceral pleura.

The research in PubMed database of “Phrenic nerve” and “Sjögren's syndrome” did not find any report.