How A Cryptocurrency Works We explain “how cryptocurrency works.” The goal of this guide is to teach beginners about blockchain and digital currencies (like Bitcoin).

Below we simplify things to make a somewhat complex system easier to understand. Do a site search, Google search, or see the links below to learn more about specific concepts.

What a new user needs to know: Cryptocurrency is roughly the equivalent of using PayPal or a Debit Card, except the numbers on the screen represent cryptocurrency instead of fiat currency like a dollar.

All a new user needs to do is set up a Coinbase account.

After-all, cryptocurrency is a digital currency, where transactions are recorded on a public digital ledger called a blockchain, and every process along the way is secured by cryptography. The goal of this page will be to help you understand these things and how they connect.

Cryptocurrency works a lot like bank credit on a debit card.

The Anatomy of Cryptocurrency

In both cases, a complex system that issues currency and records transactions and balances works behind the scenes to allow people to send and receive currency electronically. Likewise, just like with banking, online platforms can be used to manage accounts and move balances. The main difference between cryptocurrency and bank credit is that instead of banks and governments issuing the currency and keeping ledgers, an algorithm does.

What is cryptocurrency? Cryptocurrency is best thought of as digital currency (it only exists on computers). 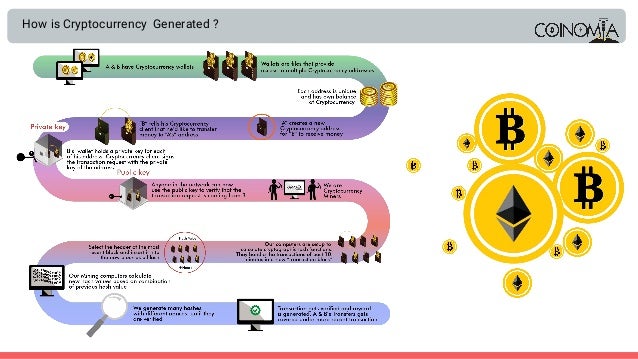 It is transferred between peers (there is no middleman like a bank). Transactions are recorded on a digital public ledger (called a “blockchain”). Transaction data and the ledger are encrypted using cryptography (which is why it is called “crypto” “currency”). It is decentralized, meaning it is controlled by users and computer algorithms and not a central government.

It is distributed, meaning the blockchain is hosted on many computers across the globe. Meanwhile, cryptocurrencies are traded on online cryptocurrency exchanges, like stock exchanges. Bitcoin (commonly traded under the symbol BTC) is one of many cryptocurrencies; other cryptocurrencies have names like “Ether (ETH),” “Ripple (XRP),” and “Litecoin (LTC).” Alternatives to Bitcoin are called “altcoins.”

How does cryptocurrency work? Transactions are sent between peers using software called “cryptocurrency wallets.” The person creating the transaction uses the wallet software to transfer balances from one account (AKA a public address) to another.

To transfer funds, knowledge of a password (AKA a private key) associated with the account is needed.

How Does Cryptocurrency Work? (for Beginners)

All users of a given cryptocurrency have access to the ledger if they choose to access it, for example by downloading and running a copy of the software called a “full node” wallet (as opposed to holding their coins in a third party wallet like Coinbase).

Whoever owns a set of keys, owns the amount of cryptocurrency associated with those keys (just like whoever owns a bank account owns the money in it). Many transactions are added to a ledger at once.

TIP: I’ve just described how Bitcion works and how many other coins work too.

However, some altcoins use unique mechanics. For example some coins offer fully private transactions and some don’t use blockchain at all.

How does blockchain work? The blockchain is like a decentralized bank ledger, in both cases the ledger is a record of transactions and balances.

When a cryptocurrency transaction is made, that transaction is sent out to all users hosting a copy of the blockchain. Specific types of users called miners then try to solve a cryptographic puzzle (using software) which lets them add a “block” of transactions to the ledger.

How a cryptocurrency works

Whoever solves the puzzle first gets a few “newly mined” coins as a reward (they also get transaction fees paid by those who created the transactions). Sometimes miners pool computing power and share the new coins.

The algorithm relies on consensus. If the majority of users trying to solve the puzzle all submit the same transaction data, then it confirms that the transactions are correct. Further, the security of the blockchain relies cryptography. Each block is connected to the data in the last block via one-way cryptographic codes called hashes which are designed to make tampering with the blockchain very difficult.

Offering new coins as rewards, the difficulty of cracking the cryptographic puzzles, and the amount of effort it would take to add incorrect data to the blockchain by faking consensus or tampering with the blockchain, helps to ensure against bad actors.

The “hashes” (the one-way cryptographic codes that tie together blocks on the blockchain) use a similar type of cryptography.

The main idea is that cryptocurrency uses a type of cryptography that is easy to compute one way, but hard to compute the other way without a “key.” Very loosely you can think of it like this, it is easy to create a strong password if you are in your online bank account, but very hard for others to guess a strong password after it has been created.

How does one obtain or trade cryptocurrency? Cryptocurrency can be obtained most of the same ways other types of currencies can.

Peer-to-peer exchanges can be mediated by a third party, or not. Please be aware that cryptocurrency prices tend to be volatile.

TIP: Like anything else in life, there are tax implications to trading or using cryptocurrency.

Make sure you understand the tax implications. In short, you’ll owe money on profits (capital gains) and may owe sales tax or other taxes when applicable. Learn more about cryptocurrency and taxes.

To summarize the above:

What is Cryptocurrency? [Everything You Need To Know!]

Mining is a process that creates new coins.

Just remember to pay your taxes.